Since we've all grown up in the fast food nation, sometimes an image is worth 57 words...Revit 2012 includes a new feature we're going to review at AU this year - the workset diplay options. When you're in a view, you can display worksets graphically in your view.

On the view control bar, pick the Workset Display option tool - you can pick from four options:

Here's an image that includes the display by workset option:

You can set these options to be any color you want - but Autodesk did such a lovely job picking them out for me... 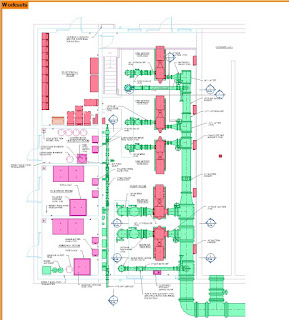 If you want to see more, squeeze into my class MP2503, Supercharge Your Revit MEP 2012 - and if you can't it'll be available to download after AU is over.

How deep do your Levels go in a Revit MEP model?

Ran into an interesting problem...we're working on a couple of different ways to approach projects - one them involved several buildings that make up a single project. Originally, we have modeled all of the buildings in a single Revit project (yes, they were all small), based on a common coordinate at one building. For specific reasons, we had to break the project up so the buildings were in their own file.

Since the MEP project was already defined with the overall file linked in, and the levels copied and monitored from that file, breaking it down into several pieces created a problem. We also want to keep all of the MEP in a single model, so little things like schedules, panel schedules, electrical circuits, shared process systems, etc. all stay connected together nicely (since we still can't connect to items in linked files without a connector - hint, hint). There's two answers, so here's the easy one first.

Since the individual buildings (4 total) were all placed from a common origin point, all we had to do was create 4 copies of the original master, then open them up and delete anything not related to each specific building - that included levels, walls, views etc.

From this point, we could link each individual model directly into the MEP model - but now we had four links instead of one, and load times suffered. There's also a fear that a novice user could try to move or rotate the buildings to plan north and the original project base point (at which point, my hand would reach out of their monitor and wring their neck).

I talked about using scope boxes to limit the extents of levels in an elevation or section view, and in this case, it's good idea to do this in the master file, so the levels coming into the MEP model don't stretch all the way across the project.

So - which approach do you think will work better for you?