Man, I'm actually flustered...I can't say thanks enough to the folks who hung out with me at AU this year. We (and I do mean we) won two awards this year - the top lecture for the Supercharge your Revit MEP session, and the top lab for Revit MEP: Systems? Filters? Layouts? I Need Help!

I've always tried to make the classes informative and fun - but I owe it to my physics/statics professor from college - who really engaged us as students, and made us think. He also took a tough subject, dragged us all over the county and put it all in context. Thanks, Frank - you're the inspiration I've had for years.

But it's the attendees that make the scores. You played along - you got involved in the class, engaged in the conversation, and put up with the technical glitches - and taught me as well. I can't thank you enough - and am even more motivated than before!

For all, have a Merry Christmas and Happy New Year - we'll see you in Vegas next year!

I sometimes get my software packages confused - in my class at AU, I made the comment that you could change the rise drop symbols in Revit MEP...and I was gloriously wrong. I've done in in ACAD MEP, since it's a block, but there's isn't a family or profile anywhere you can edit to change these...so I had to spend a little time figuring out how I would make this work for me.

Revit MEP comes with a variety of different rise drop symbols as their defaults - so they've got most of the range covered:

They've got crosses, slashes, slash and a half, solid fill...but check out the one on the right - they don't have that. I cheated...

I created a detail family that includes a solid fill, and add model lines around the edges so it could be aligned with the geometry in the rise drop symbol. It's not going to update if the duct size changes, but by the time you get to CD's to produce the documents, hopefully you'll know what the duct size will be. This is kind of similar to the pipe cut symbol we found earlier this year - it's not part of the model, and it's manual, but you can use this to get the results you want.

Keep in mind that in order for a rise drop symbol to appear, the duct has to cross to a higher level. Just stopping it doesn't produce the right symbol...so I'm working on a union that has the fill symbol nested in the family. It sort of works, but just like the one I directly use, it doesn't change size if the duct size changes.

Let me know if you want the annotation, and I'll email it to you.

Back in the Wind - another AU in the CAN!

Ok, I've had a week to recover and get back on east coast time...been a busy week, and haven't been able to post until today, but it's time to put thoughts into bits before they're blown away by age... 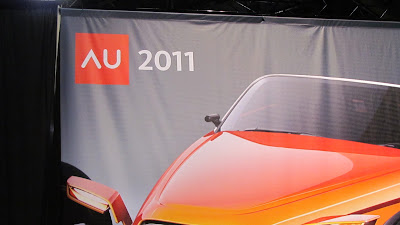 I didn't realize how many people came to AU this year until I went to get my t-shirt - and they told me they had already given out 8,000. Total attendance was around 8500 this year, up from the last two - which I think was mainly due to the change of venue (Venetian versus Mandalay? gimma a break!) but also people are starting come back out of their holes to learn something new. The last few years have been tough, and while it's still not back where it needs to be, the business climate is gradually starting to improve.

And you couldn't come away from this year's event without getting a real taste of what's coming in design technology, and see how far we've come in just a short period of time. The cloud, Revit on iPad's, watching half the group carrying around tablets instead of tons of handouts (are we finally moving towards the paperless society?), new technologies for industries such as lighting design...the list can go on forever. I'm even more motivated than before - and worried about keeping up. As a business, we have to continue to become lighter, nimbler and faster than in the pace without losing accuracy - and we still have to make sure we don't chase technology that may not pan out. But after seeing how much the vendors are investing in their own future, especially in the tools the next generation of designer will use, I'm more confident about taking those risks.

An example gets back the simple "phone" and other portable devices we all carry. It's not a phone, but a smaller, powerful computer. IT kept me in contact with emails and text prompts with the home office while I was in between classes (which I actually got to take this year). I watched someone run Revit and Design review on an iPad - and thought about my project manager that took his notebook to a client to show them our Revit model - and now, he can do it on a device that costs half as  much, without risking taking the data with him. 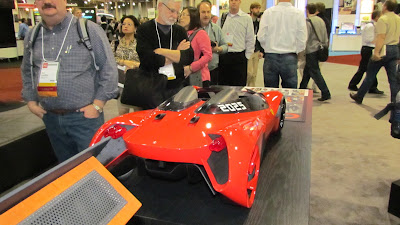 From other technologies, I'm still a little skittish about the whole point cloud concept - but as its closer to being able to translate a million points into a single pipe object, then I'll keep watching...for now. But there were lasers everywhere, along with 3D printers producing content much faster and more accurate than the old cardboard and exacto knife days. 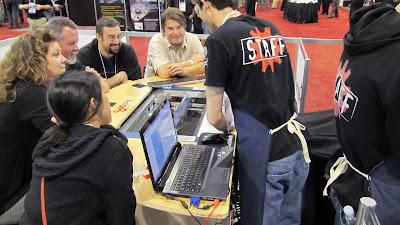 But the big thing for me was how many training vendors where at the event. Every one of them offered some form of online training - which is interesting in the fact that our current educational model, especially in universities, which are so bloated and full of themselves, is still lagging in understanding how today's student learns - and how different it is from how my generation learned. (By the way - I'm not talking about all professors - I had ones that were motivating and interesting to listen to - I'm mainly referring to ones that can't seem to get to the point, and make sure you learn what you need.) The fact that a user can take a series of sessions, that gets to the point and doesn't lose itself in a professor's conjecture or opinion, is what gets me excited. In the engineering and architecture world, that's critical - because our buildings and structures depend on us to come up with designs that are less likely to fail - and less costly to design.

And I think this is where, as a design industry, we're scared the most. We look at how technology has improved and streamlined the design process, and we worry about reducing revenue streams. But the true impact is for the forward thinking owner, who can look outside the box, and say "now that I have more time, how can offer more services to offset the changes in the stream, and offer more to my client?"

We have a huge responsibility as designers to educate our clients on the changes technology is bringing. We have to let them know that you can do more with a tablet, walking around a site that tracks where you are and can bring up relevant models of what's underground, behind the walls or above the ceiling, than you could printing out a massive set of drawings, which only represent a static point in the design. We have to educate them that it's OK for us to sit down earlier in the process, look at our models with us, and get a better idea of what's going on sooner rather than later - so we can dramatically reduce the need for major changes later.

And we absolutely must educate them on how they can leverage what we do with technology to save their own clients money and time later - whether it's a taxpayer that wants to get the best design for their local water treatment facility, and have clean water without having to have their children pay for it, or the fast food lover who wants to get their nuggets the same way at every chain - because we can do prototyping and consistent design better than ever. Everyone can benefit, but we've got be able to get outside of our box to do it. The successful learns how to communicate this to their client - and improve their status as the trusted advisor. 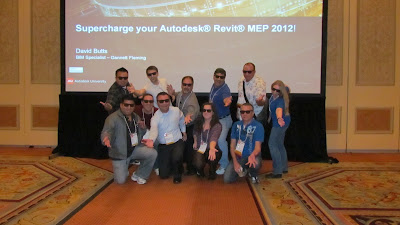 So, that's my takeaway from this year. I'm more motivated, more excited and equally nervous about the future - but we're all going to be okay. Thanks to all the attendees that put up with my jokes, video camera and home movies. I hope you caught some of my energy during the classes, and are carrying it back to your firms as well. It's an exciting time to be in the industry - so enjoy it - and have fun! 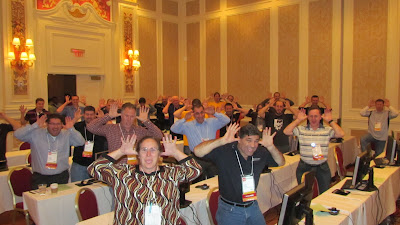 Have a Merry Christmas!