Been running across this error for several releases, all the way back to 2005. Usually it occurs when specific tools (such as the AEC Callout command, that creates sections, elevations, etc.) are not properly registered when the program is installed. Some users have success fixing this using a repair, but I didn't...and here's why I think that happened.

- ALWAYS install Autodesk products as an administrator. A quick way to do this is instead of just double clicking on the setup.exe file, right click on it and choose "Run as Administrator". Even though I've got admin rights on my Win7 notebook, it doesn't always work - so this guarantees it's installed with the correct rights.
- ALSO - use a CUSTOM install - to do this in 2012, you have to pick the AutoCAD MEP 2012 install package on the new installer - this expands the window to give you your options. I always do a custom install, adding Express Tools, and more importantly, the AutoCAD Architecture profile - that way I have all of the AutoCAD Architecture tools.

After wiping out my initial, "typical" install, and reinstalling, everything works fine...even an old dawg like me needs the shock collar once in a while... 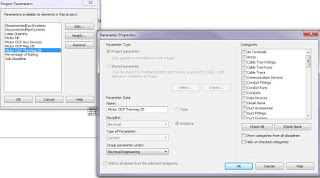 - Create project parameters for anything you want to add to the panel schedule fields first. I used project parameters, but mainly assign the data to electrical circuits or electrical equipment. Our MCC needed to included circuit breaker ratings and horsepower, so I added the parameters first. It's important to note that only electrical circuit parameters can be used in the body of the panel schedule.
Next, make a duplicate of an out-of-the-box schedules and edit the copy, so you're not messing with the defaults. I needed an MCC schedule, so I copied the switchboard schedule and started from there: 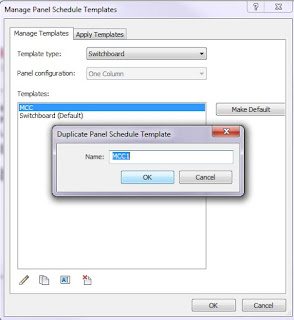 After making a new schedule, use the Edit Templates command on the Manage tab > Settings Panel > Panel Schedule templates tool. Pick your panel - the template editor will open. To edit a column, you either select the column header or a field in the column. This lets you change the parameter to another value, or add additional columns. In this case, I added a column for the overload current protection values and then chose the project parameter for Auxiliary Devices: 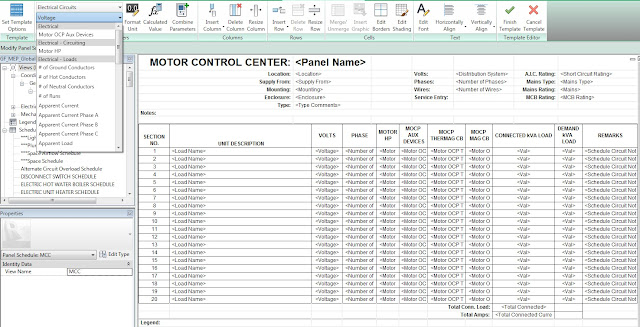 That sets the default values for the column and header, which you can click on and edit the text, the alignment and the formatting for the text.

Next up - I'll try to get a post about running calcs in the panel schedule.

Have a great weekend!

David B.
Posted by David Butts at 5:00 PM No comments:

Wish I'd had this years ago...

And have a great day!

David B.
Posted by David Butts at 2:43 PM No comments:

Got my digital copy of the April 2011 version of ASHRAE journal, with an article written by Steven Bruning, a PE in Atlanta that worked on the project and is a past chairman of the TC 4.1 standards committee on load calculations and procedures. (here's a link, if you're an ASHRAE member - http://www.nxtbook.com/nxtbooks/ashrae/ashraejournal_201104/#/32)

I'm glad someone is actually trying this out, and testing it - without real-world feedback, it's hard for software developers to really get a handle on how the software is being used. It was pretty obvious from the graphics that Revit was being used. So, let's talk about the article.

The project starts by utilizing IFC imported files. I'm going to be the first one to get up and rip IFC - this technology simply doesn't work as it should. There isn't support for MEP objects across all platforms, and all of the programs have issues with imports that are well documented. So, my first thought was, who's advising the author? It should be the reseller, and without that strong and correct relationship, it appears they're on their own to figure out what to do and what not to do. I would have been the first one to pipe up and say, DON'T - recreate the model in Revit, if you're going to use Revit as the analysis tool. If it was created in an earlier version of Revit, it should have never been exported - but if it was something else, this was a known issue, and the author should have been pointed in a different direction early in the work. When you start off with problems, it has a tendency to make you doubt what else could be happening. All this did was reinforce my belief in the value of training from qualified instructors - this isn't AutoCAD, where you hand someone a book, and say "go mess around with this" - the users HAVE to be trained by someone who knows how the software works, and how it's supposed to work from an engineering standpoint.

Moving on into the article - once the architect rebuilt the model, that saved a lot of headaches - which goes back to a comment I've been making for years - model ACCURATELY - if you can't create it the way it's going to be built in the field, then you're missing the point of BIM. And the system works best when everyone is on the same software. I keep hearing from managers and engineers that they're model the architecture but the engineer will use AutoCAD - that's a cop-out - the program will produce the right results when properly used.

Which gets me to the next section. The author points out a few flaws - he had a problem with the program's assumptions for how the loads are assigned for walls, doors and windows (the materials) and he had to manually input light data. First up - all of the construction settings for the values for walls, include SHGC values for windows, etc. are stored in the constructions.xml file (which can be easily edited with Notepad), and default ASHRAE 90.1 values based on space type (which are easily edited via a dialog under the Manage > MEP Settings panel > Building and Space Type tool). A user can select multiple rooms at once to change these default values.

One item I absolutely agree on is the lack of documentation. Aside from my own chapter in the Revit MEP 2011 book, there is very little offered up other than the help files. Making sure a user knows where these settings are, that cause him to question the validity and accuracy of the results, should be a front and center document or training class. We offer that training internally to any engineer on a project, so they know just how detailed and accurate a report can be - and the 2012 version exposes even more of this data, giving the engineer much more control. The Help files do document the basis of design most areas, but when you're talking about the 30 year engineer, he's not as comfortable conducting that search - give him a written book or article, and that would have helped.

I'm curious to know if the engineer attempted the gbXML export to Trace or other applications that can read this data, and compare the results. We've come up with similar results with the initial calcs being undersized, but that was mainly due to the modeler/user not assigning the correct properties to the space/zone or energy settings.

So, I'm going to go out on a limb and apologize to Steven - in the reseller channel, as a long term Autodesk user, and as a BIM specialist at my firm. Somebody didn't do you the justice of making clear how important it is to know how this program works, what its limitations are and how to get the most out of it. I agree with him on his pleasures, and mostly agree on his pains - although I believe the right guidance would have helped him overcome some of this, and have a better experience. And you're right - the potential is here, given the right direction from users such as yourself, that are willing to try it out. But I don't think we're that far off from giving him what he needs.

My key areas of agreement:

- Don't use IFC - at this point, it's still not the best way to use these models, and it simply doesn't work as well as advertised;
- Make sure the users know how to model correctly so that tweaking is at a minimum;
- Get a defined workflow that establishes where items should be schematic and/or detailed, so the results are correct;
- Clearly define what files and settings control how the analytical model is controlled;
- Make the documentation for energy analysis a detailed, front and center publication. We can write our own stuff, but if we don't know or understand the intent behind the developer's thoughts, then we're just guessing;
- I'd like to see a report editor in future releases, instead of just 3-4 options (as well as an editor for the constructions.xml data that's easy to use) - the output is worthless unless it's easy to follow, and the user has control over the published results.

Steven - I'd love to chat about this with you, so if you're ever in the Raleigh, NC area, give me a call - I value your opinion on this.