How do get the #$%#@$ Revit drawings to look right....Lineweights and Object Styles!

I'm an old school kind of guy - I started in the "chalk on a rock" days where we were putting ink on mylar. In those days, you had to know everything...before you put the pen to paper. AutoCAD, for how much I love it, made us a bit lazy, since we could make all kinds of changes quickly. Even getting the documents to look right has a couple of ways to do it (CTB vs STB, layer colors mean a specific penweight - ever get into a fist fight about this?).

Now Revit comes along a while back, and all of our MEP engineers are finally starting to move forward...albeit begrudgingly. One of their big gripes is that they want the same visual printed quality that they had using ACAD and the board. Out of the box, Revit has a bit of an unusual set of lineweight settings that I'm still not really sure where they came from (when was the last time you had a 1/2" lineweight), so I went back to my old penset (Kohinoor - remember them?). We used 4 penweight as industry standards - .25, .35, .50 and .70. When we got CAD, we got a little more sophisticated and started using .15, .18, .40 and .60 weights - because our old HP 7585 supported using 8 pens (woo-hoo! technology is so cool...).

So I had to make up a little chart that helped me understand what the conversion where between the old metric and my new best friend Revit MEP. So here's my table of penweights I used to satisfy all my old school engineering buddies (yes it's in spreadsheet form - send me an email and I'll send you the file): 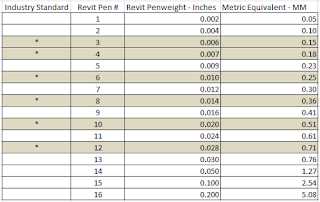 Anything that's highlighted is pretty close to what we used to use as an industry standard. And I gave us a few more options, so the only thing to do now is go to your objects styles, and make the adjustments accordingly.

So if you still think Revit can't produce the same quality document that you're used to, all you need is a little knowledge - and a handy calculator...and a old school geek...

The Z Man is online...with a new Blog!

One of my longtime co-workers, Michael Zeeveld, our technical engineer in Charlotte, NC has jumped into the blogging fray. He's posting tips and info about Revit, BIM and other architectural sundries. Check it out!

One of our technical Engineers, Dave Kaldy, came up with a couple of tech solutions I thought were worthy of the post...if you like these, send him an "attaboy" email to dkaldy@advsolinc.com.

A lot of times we get calls from clients that are trying to reduce their Central file size. The typical response is to audit, purge , and then compact the file, and if that doesn’t bring the file size down, consider breaking the model into separate files. Here’s the new thing to try before breaking into separate files:

For example I received a Central file today from one of our clients that was 117 mb. After I detached and saved it as a new Central file to my computer the file dropped to 64mb. I then did an audit, purge, and compacted the file and it dropped to 63 mb. This particular client had been making new local file every day, but they have not touched the Central file directly in about 6 months. Just something to keep in mind...

Workset Visibility in Views
There is a difference in how this works from 2010 and 2011. In 2010 when the Workset is first made there is a check box to make that Workset “Visible by default in all views”. If this box was not checked when the Workset was made then that Workset will not be visible by default in any new views made in the project, and you will have to change this visbility setting in the VV of each view. To fix this you will have to make a new Workset, check the “Visible by default in all views” box, and then move everything in the model from one Workset to this new Workset: 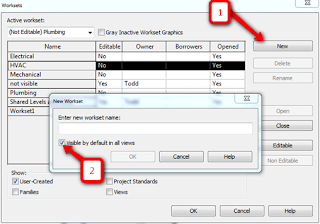 This issue was addressed in 2011. If you look at the Worksets dialogue in 2011 there is an additional column for “Visible in all views”. Worksets with this box checked will be viewable in new views (such as sections).