First up, thanks to all the folks who've followed along. With close to 200,000 hits and 200 posts since we started, it's been an honor and privilege to have the opportunity to share ideas and opinions. Thanks for following along, and here's to 200 more... 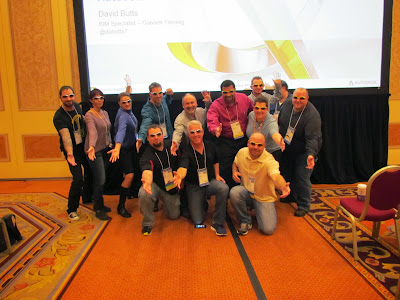 
And a great time was had by all. Thank you, good night!


It was definitely an interesting year, starting with the infrastructure symposium and keynote address, right down to the labs and lectures this year. Back at the Sands Convention Center (the Venetian by far is my favorite venue), about 9600 of my colleagues made the trek to the desert. The big focus continues to be on the cloud by Autodesk, but long terms apps also got a lot of attention.


First up, my take on the cloud services. While some concepts (such as running Revit or AutoCAD on a cloud machine as opposed to a local hard drive) are ones I’m keenly interested in, I’m not convinced the security of stored files and projects is where we need it to be. Since many firms like ours are still doing a lot of high security work, we need to work on a better way to wrap our firewall around Amazon’s servers (who Autodesk uses as their cloud source). We had some good conversations on this, but newer tools such as Simulation CFD are infinitely more productive in the cloud than on my laptop. I think we’re getting closer, and as we move into 2014, I’m sure we’ll be giving this a much harder look. If the costs work out better than upgrading systems every three years, then it’s definitely a strong selling point.
One item I covered I was surprised more people didn't know about was Inventor 2014's ability to convert equipment models to RFA/ADSK files for easy use in Revit. I covered this in both of my Revit lectures (MP1304 and MP1507), so download these handouts. I also included a sample template and IFC conversion file for AutoCAD MEP to Revit MEP, so download these early and often. Thanks to the Pleasant Hills Water Authority and Mon Valley authority for letting me use their projects as great examples of our work.


Next, the crowd part. It was interesting to see how many first timers there were this year. In my lab on AutoCAD MEP, as well as one I assisted in for Matt Dillon, the overwhelming majority were new users to the software. Concepts such as Project Navigator were some of the items they weren’t familiar with, so covering “out of the norm” methods and features can easily get lost. I think next year will be a good time to bring back some quick start labs for this level of user, holding these labs early in the event, and holding the intermediate/advanced topics on the later days.


Speaking of labs, we definitely needed to improve on this year’s methods. Missing datasets, unzipped files…all are usually conquerable if the instructor is aware they need to touch every system prior to the class. After checking a couple of systems, I made the assumption the rest were OK, but that was far from the truth. Scratch one up to losing my diligence – that won’t happen again next year. I recommended that the instructor desktop Autodesk provides serve as a lab backup just in case, with the datasets shared from that box. If there’s an issue, it’s easy for the assistants to overwrite the local files and catch everyone up. If files are missing or need to be added, it’s much faster to use the share drive than running around with a bunch of USB keys.


There were definitely a lot of good classes this year – on families, large projects, and newer tools. While I understand the desire to have a greater quantity of classes, shortening the afternoon sessions to 60 minutes left too little time. I think it’s viable to go back to the 3 ½ or 4 day event, and offer sequential courses to help the users learn from beginning to end how a program is supposed to work – even if it’s from a 5k foot view.


Next year, we’re back at Mandalay Bay from Dec. 2-4th, along with several overseas events. Hopefully we can take some lessons learned and continue to make AU one of the signature events in the world that everyone wants to attend.


And for all my peeps that came to my classes and lab this year, thanks! It was great fun, and I’m looking forward to sharing more secrets (and crazy gifts) next year.